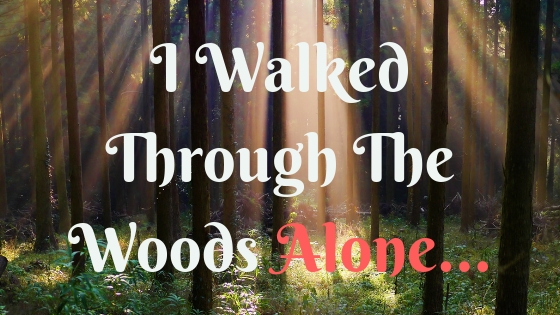 I walked through the woods alone recently… Not because I had to, but because I could. This was the first time it dawned on me… I COULD! So, I did! I took the path less traveled. I walked through the woods alone, and I’m so much better for having done it. Now, I will tell you, there were so many signs against me doing this.You’ve probably seen signs posted 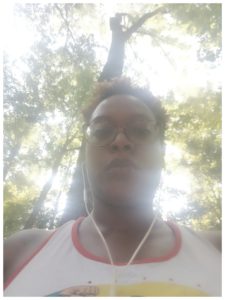 throughout local parks, advising people to walk with a friend. But when I woke up, I knew I was going hiking that morning, and I was determined to make that hike an unforgettable experience. This journey was not about planning for the unexpected. I was not trying to be cautious. I was on quest to dispel a deeply rooted fear. When I first got to the park, there were orange cones blocking the familiar path. This is the path I would typically take to get to the rear parking lot and familiar trails. There were additional signs indicating that trails were closed for restoration, but other areas of the park were open. I started to turn around, but noticed more cars were coming. They were headed in the opposite direction. Perhaps it was their familiar path, perhaps not. So, I said to myself, today is the day!

I was terrified. This may reasonably lead you to believe that I’m this prissy little girl who has never been to the woods. Maybe that’s why I was terrified. Perhaps you think I just have little to no experience there, but that’s not the case at all. I was exposed to the adventures of the great outdoors at a very early age. Having grown up in the Seventh Day Adventist Church, I was a member of the Adventurers and Pathfinders clubs. To give you some context, we did activities and earned badges like the Scouts. I don’t remember a lick of it now, but I actually completed outdoor survival training. I was taught to read on compass, to find my way using the sun if I got lost, how to survive, and how to identify traps and other dangerous things. Despite all of this exposure, I still was not an outdoorsy person. In fact, I only started walking through the woods for fun, because it is something my wife enjoys. Because of her, over the years, I’ve fallen in love with hiking and walking outdoors. I’m not a super serious hiker. I only enjoy hikes that are under 10 miles. It’s peaceful…But until that point, it was something I never experienced alone.

I took the path less traveled, not because I had to, but because I could, and I’m better for it.

As I started to walk around, since I was not familiar with the area, I was overly alert. Remember, I told you there were cones blocking my path to familiar trails? I not only hiking alone, I was hiking in unfamiliar territory. I was all for it, but fear crept up inside of me. It has a habit of doing that when I’m having fun… I continued to walk, I was determined to make this an experience I would never forget. But initially, I was only walking around in circles, keeping my eyes on the blue playground structures. Everywhere I went, I made sure I could see a blue structure, because it made me feel more comfortable for one reason or another. After a while, I decided I didn’t want to play it safe anymore. Going around in circles, with my eyes fixed on the playground, while it made me feel safe, it was not giving me the experience I was looking for. I decided to branch out.

My biggest fear at that point…Getting lost! I often get lost. I still navigate my way around Charlotte, because I’m not a very directional person, and I knew I could not GPS my way out of the woods.  I pressed on. Once I did, I ended up in areas of the park that I never saw before. I walked, meditated by the lake, sang out loud, and had a marvelous time. I was terrified at many points. At one point, I saw someone walking a huge Hound, the dog was not on a leach, I was decided to take a break, away from where they were headed. Later, as I was singing Hello Fear by Kirk Franklin, a black snake ran across my path. I jumped, and then I laughed, and then I continued singing. For me, walking through the woods with absolutely zero preparation, not even a bottle of water, while undoubtedly irresponsible, was a mind building exercise, to teach me that I could overcome any fear. It was intended to serve as a reminder to myself, that no matter what’s going on around me, my reason for doing something is always much bigger than whatever fear I may experience while going through it. That was my personal goal.

But… it got me thinking, this must be what people entering their retirement years feel like.  I’ve seen it many times in my prior life. People get to their retirement age, they’re excited to have a new experience, they welcome it, they’re excited about the next phase in life, they feel like they deserve it, but they’re terrified. They have no clue what to expect. They have no clue where to go. They don’t know who to trust. They don’t know the best decisions to make or the best direction to go. They are bombarded with choices. They’re more or less going at it just like I did – through unfamiliar trails.

Fast forward to the next day. I walked through the woods again, but this time with my lovely spouse. She was excited to have me introduce her to the new trails I raved about the day before, but shortly after we started our walk, she stopped, panic stricken, “we have to get off this trail!” “Why?” I whined. “Because this is part of the disc trail. We can get hit.” You see, the path that helped me overcome my fear, was not suitable for our journey together. I was completely oblivious to the fact that my new discovery was not entirely safe. I could have been hit many times the day before. The path that made me feel at peace, caused her some anxiety. She knew what could happen. Part of me was irritated, because I wouldn’t get to share the experience I had with her after all. We discovered new trails together. It was a very different experience.

The more I thought about it, I realized, it was impossible to share the exact experience I had alone. Some people miss this part. As they navigate through different phases of life, as they face marriage, life, death, retirement, etc., they don’t stop to consider the purpose of the journey, and the best path to achieve it. They try to travel through someone else’s path, or they walk around in circles, looking for the familiar structure. They buy the same insurance as their friend, they try the same home brewed remedies as their neighbor, because it’s familiar. It makes them feel safe. It doesn’t even matter if it works, makes them anxious, or fail to give them the experience they are seeking. It’s easier than walking the path less traveled. 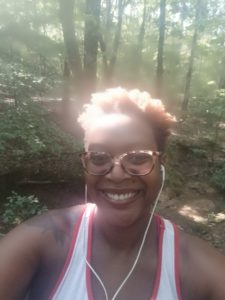 Remember, I walked through the woods alone, because I chose to, not because I had to. I was deliberately trying to scare myself straight, because that was part of the training I felt I needed at that moment. However, when we’re talking about the important phases of our lives, specifically the phases that we know are coming, there’s absolutely no reason to go at it alone. If in fact you choose to go at it alone, have to go at it alone, or things simply change, having planned for the unexpected, will reduce the anxiety that’s sure to come from walking through unfamiliar trails. You can’t predict what’s going to be in your path. You can’t predict everything you’re going to need. But if you don’t want to go through unfamiliar trails, all jumpy and scared, you should prepare to deal with the unexpected.

I shared a picture of myself at the beginning of my journey with my Facebook friends, and I received mixed remarks/reactions. Some told me to be careful, some told me to stay out of the woods, and others cheered me on. Overall, I received good advice about tools that I can use in the future, to plan for the unexpected, and keep me protected, while enjoying my impromptu trips through the woods.

Few things are guaranteed in life, but one of life’s guarantees is also a common goal…at least it is a goal of mine. Getting old. I want to get old. It’s a blessing! But as we age, our needs change, our journey changes, the people we love and want to provide for change, but it’s not a phase we have to walk into with fear and anxiety. Even though you are sure to walk through unfamiliar trails, you can at least arm yourself with some bear spray, so you can conquer the unexpected.