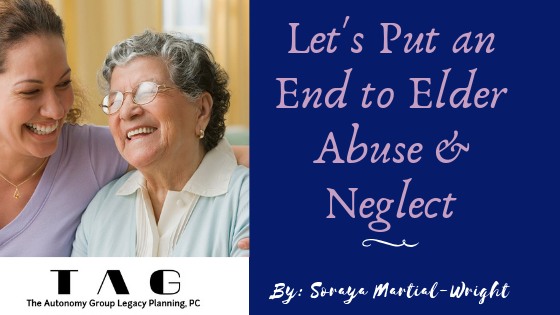 The month of May is Elder Law month. Throughout this month, we will be discussing various topics that are Elder Law related, meaning issues that typically affect not only the elderly, but also others who are vulnerable and disabled. This week, we are going to focus on Elder abuse.

Elder abuse is not a widely discussed issue, so some of you might ask, “what exactly is considered elder abuse?” Elder Abuse is any physical, emotional, or sexual harm inflicted on an older adult. This type of abuse may be physical, emotional, sexual, financial, or neglect by those who are responsible for their care. Believe it or not, in the United States alone, there are more than half a million cases of elder abuse reported each year. Sadly, there are millions more that aren’t even reported.

For physical, emotional, and sexual abuse, there are usually noticeable the signs. They include:

One form of abuse that’s commonly discussed, are financial scams against the elderly.

Earlier in the week, I conducted a poll on social media and asked, “How would you feel if your parents were scammed out of $100,000?” As I expected, the majority of of those who responded said they wouldn’t care for that very much. Unlike physical abuse and neglect, financial exploitation typically goes unnoticed for a while longer. It is easy to spot a bruise, but it’s not as easy to identify abuse when money is involved. Some examples of financial exploitation include:

Sadly, the elderly, the vulnerable and the disabled are often exploited by their loved ones and caretakers.

If you notice any of the signs above, it is time for you to stop and pay attention. Make someone aware of what is going on, and take the necessary steps to get help for your loved one. Stay in contact with the people you care about, so that you can keep up with what’s going on and ensure they are ok.

If you find yourself in an abusive situation, tell someone that you trust – A doctor, close relative, or friend. If you don’t like how you are being treated or how things are being handled, tell someone.

If you see someone being abused, you need to report it. Elder abuse is a human issue. Together, we put an end to it.