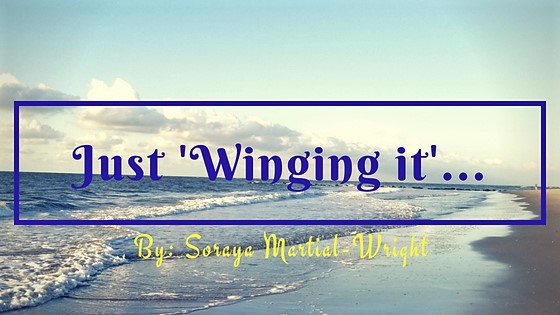 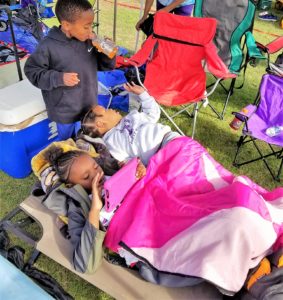 Unless you’ve been to a track meet, all day, made sandwiches, bought a tent, bug spray, sunscreen, an umbrella, a poncho, some ice, maybe a blow-up sofa… you don’t know anything about #tracklife. OMG! I have a love hate relationship with “tracklife,” but it is so much more love than hate. My kids are thriving! They get to exercise, while having fun and making friends. Most importantly, they learn that in life, you are only competing against yourself, your last best, your personal record.  That is empowering. This is our second year doing the life, so I’ve learned a few things along the way. I no longer scream “good job baby,” only to find out it was actually a scratch, meaning it didn’t count. I care. I see their potential. But they are still kids! They are in it for the fun. My son in particular, he loves to crowd. He spends more time smiling at his audience than performing. Gotta love him!

The day finally arrived. It was time to compete in the meet that truly mattered…the qualifier for nationals AKA The Junior Olympics. Everyone wants to make to nationals. Last year, our first year as a track family, my daughter was first in the region for 8 and under girl’s Shot Put. We traveled to Kansas so she could participate in The Junior Olympics. They were both focused on nationals. But last year, my son didn’t qualify, so he was determined to be in the number this year.

So, he decided to make a solid effort. He finally got serious… ON THE DAY OF THE MEET! He was practicing his stance as he waited for his turn, eagerly awaiting feedback on his practice run-throughs, focused. The last-minute effort paid off just a bit. He made to the final round for Shot Put. This meant he was one of the top 8, while others were escorted off the field. He was ecstatic! I was proud of him. He was top 8 in Shot Put. Even I didn’t really expect that to happen. Heck, I tried to get him to focus on Long Jump… I’m a realist. He is not the biggest kid, but when I asked him which event he thought would take him to nationals days before the event, he boldly said, shotput. I didn’t discourage him. He called it!

At the end of the final round, I watched as I closed his eyes, put his hands together, and prayed with everything he had. Only the top 5 would go to nationals. He was convinced God would work it out. I have told him as much many times. Sadly, he was disappointed. Despite his last-minute effort, he was not in the top 5. After learning it was over, as he walked towards me, I could tell he felt defeated. His head hanging low, he said, “I didn’t make it to nationals.” I pulled him to the side. I said “son, I saw you praying earlier…” and I waited. “I did” he replied, “but it didn’t work!” I took his little chin in my hand, and lifted his head so he could see my eyes.  “Son” I replied while trying to maintain eye contact, “faith without works is dead! Do you know what that means?” He stared at me for a few seconds before we both said “no” in unison. “Son” I continued, “I knew your prayer wasn’t going to work even while you were praying.” He looked at me with his bright eyes, his long eyelashes fluttering with confusion. “See son” I resumed anticipating his thoughts, “you can’t pray for God to do all the work you failed to do. You can’t just hope for the best. You have to plan for best. Work for the best. You can’t just play around and expect a miracle to save you. I don’t want you to ever think prayer doesn’t work, because It does! But you have to do your part. Does that make sense?” He was still somewhat confused, but I planted a seed. He understood miracles required some work on his part. Maybe similar to being good so Santa could bring gifts…?!?  I could tell he wasn’t completely sure about everything I said, but it will come back to him…someday. 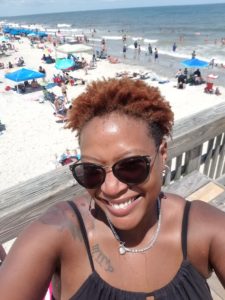 Fast forward a few weeks… I, the old wise one, decided to take an impromptu trip to Tybee Island. I had a rare opportunity, no spouse, no kids, all of them traveling, I could go anywhere without an agenda. I got up, found an Airbnb at the last minute, packed a small bag with my bathing suit, my toiletries, a few cover-ups, and some flipflops. I didn’t even pack beach towels. I just grabbed some while traveling. I’d just wing it. It was only me after all. I had an amazing time! I stayed in the water as long as I wanted. I read without interruption. I sang while swimming. I worshipped. I was sooo relaxed. After recording a lovely video of myself singing Anthony Brown & Group Therapy – Trust in you, with my feet buried in sand, I decided to go for another dip. Not long after I started swimming, a huge wave came, knocking my glasses off my face. That may not sound like a huge deal, but these were not just sunglasses. I need them to see! I am the type of person who needs my glasses to find my glasses, so I stash the old ones strategically for that purpose. This was a big problem. I was alone, 4 hours away from home, winging it. I started to walk slowly, retracing what I believed to be my last steps, searching the sand with my feet, praying that I would miraculously find my glasses. Within the first few seconds, I found a pair of glasses. I was excited, until I realized they were not mine. I was determined not to panic. I squinted my way back to my chair and resumed reading. I went back and forth, throughout the day, circling the area where I thought my glasses might be. I never found them. Ironically enough, I started writing this blog in my head. Here I was, stranded, because I failed to plan for the unexpected. I chuckled to myself. In this case, it was not that unexpected. I should have planned for this. Under normal circumstances, I’d have an extra pair of glasses, two pairs of contacts, and a pair of sunglasses. I had none of those things, because I was just winging it. 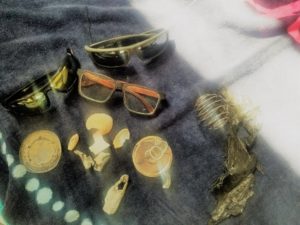 I found several items in the sand that day, including 3 pairs of glasses, a metal ball from a protein shaker cup, a kid’s swim shoe, shells, plastic, the metal top from a fruit can, none of those things were what I needed. You just can’t wing your way through everything in life. Someone else’s glasses could not help me see; the swim shoe would not help me walk. I needed to have planned ahead for this moment. As I remained surprisingly calm, I recalled keeping an old pair of glasses at the bottom of my glove-box, in my old car. I started thinking. Did I transfer them into my new car? I put on the one pair of prescription glasses I found in the ocean. Although they were a little stronger than my own prescription, I could see well enough to get by if I had to. I was sure to have a killer headache afterwards. I walked to my car, I opened the glove box, and at the very bottom, under a stack of paper and junk, were my old glasses from 6 yrs ago. They were not at all the style I would choose to wear today, and the tortoise shell finish was dull. I thought I looked foolish. I slipped them on and felt relieved. They were not my current prescription, but I would definitely be able to drive in them without getting a headache. I did not plan adequately, but some advanced planning saved the day. I laughed at the irony. I thought about the conversation with my son weeks earlier. Here I was, in the middle of the ocean, praying that God would save me from my failure to plan. It wasn’t going to happen. I knew it. Prayer works, but proactive planning is a must, because you just can’t ‘wing it’ through everything in life.